Practical Results Coaching | How heavy are your Commitments?
51105
single,single-post,postid-51105,single-format-standard,ajax_fade,page_not_loaded,,select-theme-ver-1.8,smooth_scroll,wpb-js-composer js-comp-ver-4.11.1,vc_responsive

How heavy are your Commitments?

in To Do Lists
0 Comments
In the movie “Up In the Air” staring George Clooney and Anna Kendrick, there is a very famous speech where Ryan Bingham (Clooney’s character) asks the question, “How much does your life weigh?” He then proceeds to walk you through the visual exercise of stuffing into your backpack all the material things and the people that weigh you down. He concludes by saying that some animals, by nature, support and carry each other, like “monogamous swans”. But in order to be nimble, adaptable, and to survive in today’s world, it’s better to be a shark. Constantly moving. Not attached.

We weigh ourselves down until we can't even move. And make no mistake...Moving is Living. The slower we move, the faster we die. - Ryan Bingham

We can debate the merits of being a swan or being a shark later. What I want to focus on is the one thing that was implied in Ryan’s speech but not singled out. And that is our Commitments. The things we told those people in our backpack that we would do. The maintenance tasks that came along with every material purchase we made. The responsibility we took on when we became spouses, or parents, or friends, or bosses. The agenda items. The Honey Do lists. The punch lists. Collectively, these are your To Do List. And I would argue that it’s this list of commitments which actually give the things and the people in your backpack their heft.

So now imagine your To Do List being added into the backpack you carry with you at all times. The more you put on the list, the heavier the backpack gets. Now some of those things are vitally important and you MUST continue to carry them forward until you can cross them off as completed. Other items, hanging over your head and weighing you down, are not so important.

For example, if you haven’t started yet planning for retirement but it’s on your list of things to do, that needs to stay there until you actually have a plan in place. No getting around that one. It stays in the backpack. On the other hand, if your buddy told you about a new startup with an upcoming IPO and you told him you wanted to research it a little more, it too may be on the list. But if it’s been 2 months and you haven’t done it yet, then relieve yourself of the burden and make the decision to NOT take any action on this. Remove it from your backpack and let it go.

In terms of work and career, if you are in the middle of a project that’s actually making progress, keep it on the list. You are actively working toward a goal and you need to keep the end in sight. Conversely, if you were thinking about starting a project and the idea is like a nagging voice in your head, ask yourself why you haven’t started it yet? Do you need to make it a priority in your life in order to get it done? Or is it time to let it go so your brain has room for new projects? 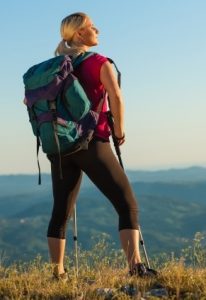 With the arrival of spring, we begin to break out of our winter cocoons and start thinking about all the things we want to do “once the weather gets nice”. And we start putting together mental lists of house projects, vacations, fitness routines, etc. The problem is we dump all these new lists into the backpack and stuff them in on top of all the lists left over from the Fall! Because despite our best attempts, we didn’t get nearly as much done in November before “the Holidays” and we certainly didn’t feel motivated to do anything once it got cold.

As you know, Spring is a time of new beginnings. It’s time to open the windows and let in some fresh air. Clear your head. Many people detox and cleanse their bodies this time of year. I would also suggest that it’s time to break open the backpack and detox that To Do List. Take an inventory of your commitments and start to lighten the load in the backpack. Anything that’s been lingering on your To Do List for over a year needs to either be deleted, or made a priority. Create a new list which reflects who you are now and where you see yourself going. Then order the tasks in order of priority and get to work! (If you need an accountability partner to assist you with this, email me.)

If you are like me not only do you have a running list of To Do items in your head, you also have physical lists…a Master List which governs day-to-day activities, and sub-lists which correspond to different areas of your life like House Projects, Work Projects, Volunteer Projects, etc.

If this isn’t you, maybe its time to adopt a new list tackling strategy. I would recommend using an app to store all your To Do Lists.  There are several good ones in the Google Play Store and Apple App Store. Pick one that allows you can create as many lists as you need to, and to share lists with other people (i.e. share the burden, like a swan). Set Due Dates and Reminders which are critical. Items on your To Do List eventually need to put into your calendar if you ever expect to get them done! Don’t believe me…tell me what day and time this week you are doing your workout?

If you have be carrying around the idea of looking for a new job, tackling a house project, going back to school, or taking better care of yourself, now is the time to honestly evaluate all your other commitments. What do you need to take out of your backpack to make room for what’s more important?